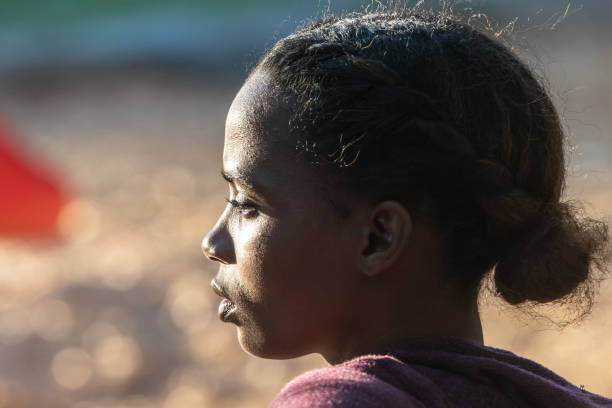 I sat on a log, my legs teasing the water gently as they bounced back and forth. The loud chattering of mothers washing clothes by the river bank and children yelling as they enjoyed the thrill of running from a distance before splashing into the water, careless giggles escaping their lips as they surfaced, filled my ears.

Abike sat beside me, unlike me her legs were drawn to her chin as she animatedly explained something. Her hard punch brought me out of the reverie I was in, eyes narrowing as she glared at me.

“What did I say?” She asked, her voice deep and throaty like a boy going through puberty.

“Ummm, you were just saying how…” I started saying, thinking of the lie to serve her when she cut in.

“Don’t bother lying to me.” She said and I offered an apologetic smile.

“Anyways, I was saying that the town crier announced that we must go home early. He said that there’s Oro today.”

“Oh right, I almost forgot. Ese ore mi.” I said before turning my gaze to the sight before us. The children splashing around serving as entertainment for us.

I saw something on the other side of the river. A thin white line buzzing with energy and I turned to Abike, hitting her hard on her thigh.

“Can you see that?” I said quietly, pointing at it.

“See what?” She asked, squinting her eyes.

“That, the white line,” I said, still pointing at it and she gave me a look.

“Perhaps we should go.” She said standing up and I heard it then.

A voice singing softly, happy, relieved and also very familiar. I held my chest and looked up seeing the white light buzz more. The voice. It was coming from there. I glanced around but no one seemed to notice, Abike was still peering down at me with worry. The voice was calling me and I needed to answer it. With conviction, I stood and walked into the water ignoring Abike’s calls.

The voice sang louder now, other voices joining her as they chanted in harmony. I knew this song. Why did I know this song? I ignored all logical thinking and moved deeper into the water. I realized after a while, the voices I heard were my Egbe. My spirit friends. I was getting there, the light was within my grasp but the further i wobbled, the further it got away from me yet the voices sang. Singing as though their lives were hanging on the song.

“Durosinmi!” A voice shouted, snapping me from my reverie. Mother. I blinked and looked around. I was neck-deep in the water, my hands flailing to keep afloat,I saw mothers watching me fear in their eyes as they grasped their children tightly.

‘The light’ I looked but it had suddenly disappeared. They were still waiting for me. I could feel it. I shook my head as mother yelled out again, Abike joining her this time. I dived into the water and swam towards mother who was already apologizing to the villagers.

*****
Mother sat by the fire and I beside her, my hands clenching onto her wrapper. The wrapper smelled of spices, leaves and musky sweat. It smelled of her. She glanced at me occasionally and I averted my gaze each time, she abruptly stood up and walked out of our makeshift kitchen. The kitchen was in front of our little hut, two giant stones placed as seats in front of the fire. I sat for a while staring at her back as she walked, mother has always walked slowly, with precision and poise like royalty and I tried many times to but my steps were far too clumsy.
She returned and stood in front of me, her lips drawn in a grim line. Her eyes bore into mine and I stared back, her eyes had the moon in it.

“What were you thinking?” Her first words since we came back from the river. I opened my mouth, tried to form an answer but gave up. I wasn’t thinking.

“Duro, you’re the only one I have. I can’t lose you, I can’t lose you.” She repeated and I saw her hands quivering.
“Ma binu si mi, iya mi. I made a mistake and I’m sorry. I just couldn’t help it, I saw a light and heard…” I heard my mother gasp sharply.

“You what? No! No! Eleda mi, this can’t be happening now. We destroyed it, we did, we did…” Her voice fell into a whisper as she repeated the mantra.

“Mother, talk to me,” I said, my eyes narrowing slightly.

“Listen to me, do not follow that light or the voices. Tomorrow morning we’ll meet baba before things get out of hand.” She said, staring at me till I nodded in agreement.

*****
Since the very day I met baba, the smell of gun powder that lingers in his hut has always stayed with me. Baba was an Ifa priest, and it was very hard to know because he didn’t wear the traditional piece of fabric with charms which other Ifa priests wore instead baba was comfortable in his Adire shorts, a fashionable wrapper tied around his neck.

Weirdly enough, when baba walked the sound of seashells clanking on each other resonated as he moved and this is the sound that announced baba’s presence today. Mother and I immediately knelt in greeting and he waved his hands at us as he sat.

“Ekaabo iya, you and your child look very strong and healthy.” He said and mother smiled, thanking the gods.
“The worst has happened baba.” Mother said, starting the conversation without beating around the bush.
“What is it? Calm down and talk to me”

“Duro still has a connection with her egbe.”

“Impossible. It can’t be, unless…” he trailed off before making eye contact with me in a way that made me squirm.

“She gave us the wrong totem.” He said, nodding his head. Mother silently started crying and I stared at both of them.

READ  Eight Money Situations That Could End In Tears

“I don’t understand,” I said and the man glared at me.
“But you do, you deceived us years ago but now, you better don’t. Iya, this child still has a connection to the spirit world and unless her totem is found soon, it won’t end well.”

“Try to remember, please. Try.” Mother begged. I sat, my thoughts going back to a time when I had mischievously pointed at the wrong spot.

“She is very wise indeed. She managed to fool us and also fool her friends in the spirit world, buying time to enjoy on earth.” He said, his tongue clicking in distaste.

“I remember where I left it,” I said, surprising even myself. Mother looked me, her moon eyes narrowing.
“I actually do, believe me,” I said and baba stood up, walking to his chambers to grab his staff before motioning for us to follow him to our house. Where my totem hid.

“Point to where it lay.” He said as soon as we got to our small hut. I ignored him and walked inside the hut, mother curiously looking at me.

“Here it is,” I said as I walked back outside, gripping tightly to the rock in my hand tied with a small piece of red cloth.

“Are you sure this is it?” Mother asked and I nodded, glistening tears forming in my eyes
“It is it,” Baba said, forcefully collecting it from me and smashing it on the floor. He gathered and threw the remnants into the fire.

“It is done. Let the gods be praised.” He said, lifting his staff to the sky and mother smiled in relief, her hands wrapped around me as she rejoiced, baba nodding curtly at me as he walked away.