The History Behind Some of Your Favourite Memes and Gifs

Memes and gifs are some of the greatest gifts given to us by the internet (aside from the ability to block annoying haters online in real-time). With pictures and short clips (usually without context), you can quickly react to situations or express how you feel.

If you’ve been wondering how some of your favourite gifs and memes came about, here’s a little ‘crash course’ detailing their origins:

Ah, this legendary gif of Funke Akindele running away and screaming while being confronted by a man is a fan favourite. It was one of the most viral gifs of 2017/ 2018 and is further proof that Nollywood is the home of some of the most entertaining content.

The gif emanated from a 2014 film ‘Pretty Liars’ directed by Tchidi Chikere. In the movie, Monica (played by Funke Akindele) scams her benefactor of some money, and he eventually finds out, deciding to come after her. Monica, in a twist of events, proceeds to insult and make a mockery of him. How hilarious 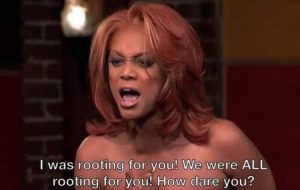 This meme accurately describes what it feels like when one of your favourite celebrities messes up or gets into a controversial situation.

So, what’s the origin of this iconic meme? Well, as you can imagine, the backstory is pretty dramatic. In an episode of America’s Next Top Model, Tyra Banks had announced that two contestants had been eliminated from the show. While one of the contestants (Rebecca Epley) was disappointed, the other (Tiffany Richardson) accepted her fate and tried to cheer the others up. Tyra Banks was disappointed at her reaction and lashed out in her in a somewhat surprising manner. 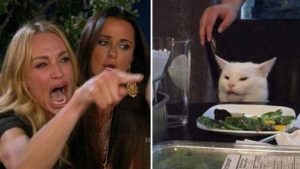 We’re pretty sure you’ve seen this hilarious meme of a woman yelling hysterically at a cat. (For the record, these two pictures have different origins yet, they somehow work together).

So, the first picture originated from an episode of The Real Housewives of Beverly Hills back in 2011, and the backstory is pretty heartbreaking. The pointing lady—Taylor Armstrong—got into a heated and emotional confrontation with a fellow housewife, as another housewife tried to calm her down.

The second half of the meme originates from a viral Tumblr post about a feline sensation. The meme seems to have taken off after this tweet.
Shoutout to the Internet for putting two unrelated pictures together and giving us an iconic meme template.

This meme gained popularity after the popular retro- Nollywood account (@nolly.babes) shared the clip via Instagram. The viral video is culled from the iconic 2003 film ‘Blood Sister’, also directed by Tchidi Chikere. In this particular scene, Gloria (played by Omotola Jalade-Ekeinde) tearfully reads a letter from her lover, in which he breaks up with her and refers to her as a ‘harlot’. At the same time, her sister (Esther) looks on, unbothered. What Gloria doesn’t realize is that her sister is a jealous and bitter woman who will betray her and proceed to steal her man. Can you imagine?
Here’s the first part of the film:

Over the past few years, scenes featuring Nollywood icons, Chinedu Ikedieze and Osita Iheme have seen a resurgence as they have been turned into viral memes and gifs. In this gif, Aki is seen looking frustrated as he picks up a machete and drops it again, bursting into tears. The gif is both heartbreaking and hilarious and has become one of the most used gifs.

Here’s the backstory: The video is from the 2008 film ‘Intelligent Students’. In the scene, Chinedu Ikedieze discovers that his father has stolen all the money he had worked hard and hustled to save up. He laments bitterly to his mum and expresses his frustration in the most heartbreaking way.

Now, you don’t feel so good laughing at hat gif, do you?
Here’s the full clip:

Which of these memes or gifs is your favourite?

Share
Don't Lose Guard. Beware Of Phishing Emails And Phone Calls Previous post
When You Need to De-Stress While Working From Home, Try These Tips Next post